How to Use the Power of Your Brain For Positive Change

We actually have the ability to change reality by choosing a different perspective.

And the brain is an extremely powerful tool to leverage if we want to experience a different reality than the one we’re currently experiencing.

Now, before you dismiss this as impossible, let me show you exactly what I mean.

The brain is a complicated network of 100 billion cells. It’s a combination of all the things you’ve experienced and thought about for your whole life.

Not that long ago, scientists believed that the brain was a static organ, that it was unable to be changed.

But now, we know that the brain is much more powerful and changeable than first believed. Researchers have even developed a quantitative MRI that can monitor molecular changes in the brain. (1)

So, how can we use this malleability of the brain to our advantage?

Let me show you.

The power of visualization

Have you heard that high-level athletes rehearse their performances in their minds over and over again to improve their results?

I love the story of the track and field runner who used detailed photos of the course he would be running in another country to learn every detail of the track before he got there. He ran scenarios in his mind over and over again, until he knew he could run the course in his sleep. So then, when he got to the track, Mark Plaatjes won the world championship. 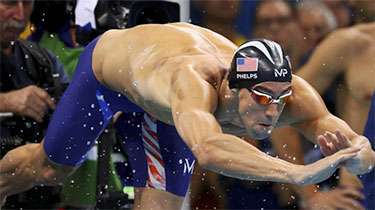 Olympic swimmer Michael Phelps talks a lot about how he uses visualization to his advantage in the pool as well. From the time he was a young child, Phelps practiced relaxation techniques followed by detailed visualization of how he wanted a particular swim meet to go. And we all know that he is the most successful Olympic athlete of all time, with 28 medals to his name.

Visualization works because your brain can’t distinguish between real and visualized events.

Studies have shown this fascinating effect.

For example, in one study, weightlifters were asked to imagine themselves lifting weights. Researchers observed that the brain patterns that were activated by actual weight lifting were the exact same as when the athletes were simply pretending to lift the weights in their minds. Even more amazing was that in this study, a group of exercisers divided into groups who actually went to the gym and those who visualized going to the gym. The group of people imagining that they were exercising actually increased their muscle mass by a whopping 13.5%! (2)

When you visualize something, your brain actually instructs the neurons to do the action. This results in a neural pathway being formed. Now your body is prepared to do the thing you thought about. (3)

Imagine the implications these kinds of visualization exercises could have on your own life.

Could you expedite your healing process? Strengthen your pelvic floor? Make more money? Have a better relationship?

The possibilities are endless. Another great example of the power of the mind is the well-known placebo effect.

This is where researchers split a group of study participants into two, giving one group the medication that they are testing, and the other group a sugar pill. None of the doctors, nurses, researchers, or participants know who is receiving the actual drug and who is not.

By the end of the study, there is always a percentage of people who believe that they have had improved symptoms, and even experienced side effects of the drug they are testing — even if they were the ones receiving the placebo. (4)

In a 2014 study of migraine sufferers, researchers found that the placebo was a staggering 50% as effective as the medication. Participants in the study believed they were relieving their pain when they swallowed the pill, so their pain was relieved. (5)

The brain is so powerful that when Matthew Nagle, who was paralyzed from the neck down, had a chip implanted into his brain to allow the use of a computer interface, he was able to simply think a command and have it appear on the screen. He would think, “move the cursor to the top right” and the cursor would move. (6)

What do you want to change?

Since we know that the brain has such a high level of control over the outcomes in our lives, it only makes sense that we try to harness its power to create a higher and better reality for ourselves.

And the great news is, we can tap into this ability no matter our circumstances and no matter how dire things may seem.

>> Want to strengthen and heal your pelvic floor? Want to feel stronger? Want to be healthier? Want a new relationship? Want to stop leaking or having pain with intimacy? Want a new job?

Start visualizing the life you’ll have after you’ve achieved that goal. Feel the feelings of triumph deep within your soul. The most important thing to do to activate your brain’s power is to use all your senses when you are visualizing your desired outcome. Look around you; what are your surroundings like? Do you smell anything pleasant?

Get really detailed about this visualization. Practice it over and over daily. These days I visualize my white blood cells being tough soldiers protecting me against harmful viruses. I see them winning the battle, and I see myself well and thriving.

I also see my life being better than ever after this pandemic ends. Go ahead, give it a shot. The results may surprise you.